How to Get Here

Montsoriu Castle is located between the towns of Sant Feliu de Buixalleu and Arbúcies, in the region of La Selva. You can get there from Arbúcies (exit 209 of the Eix Transversal, C-25) or from the AP7 motorway, exits 10 and 11. For exit 10 (Hostalric), take the road towards Arbúcies and at approximately 3km from Hostalric turn onto route GI-552 towards Breda. Further on you take the road that leads to the residential area of Fogueres de Montsoriu (you can also get to the castle from the road that leads from Breda to Arbúcies). For exit 11 of the AP7 (Sant Celoni), you must take the C-35 road towards Hostalric and the GI-552 to Breda and Arbúcies. Three kilometers before the Breda exit, at Coll de n’Orri, you will find the turn towards Fogueres de Montsoriu. Follow this road towards Fogueres de Montsoriu until you reach Coll de Castellar (3 kilometers), where you will find the parking lot. 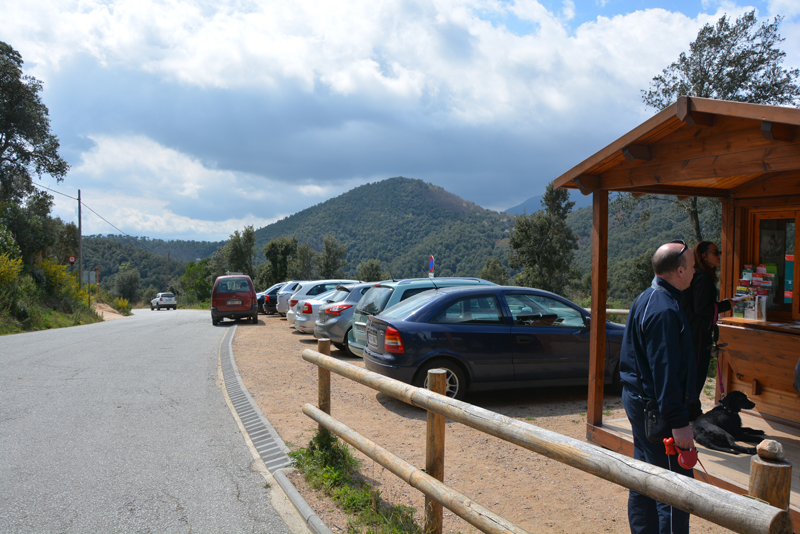 At this point you must leave your vehicle next to the road (signposted parking), and follow a forest trail on foot up to the castle; it is a nice excursion of about 2.8 kilometers, taking between 25 and 45 minutes. When leaving the castle, if you feel up to tackling a steep shortcut, you can take the path that starts at the external square of the castle. Following the signposts you will get back to the paved road in less than 10 minutes.

Persons with reduced mobility can request access with their vehicle up to the castle by sending an email to info@montsoriu.cat one week in advance.

We remind you that during the visit you will encounter different staircases, and therefore it is not recommended for persons with reduced mobility.

The Castle of Montsoriu, located on the border of the municipalities of Arbúcies and Sant Feliu de Buixalleu (La Selva), rises majestically on top of a 632 meter high hill that belongs to the last easterly foothills of the Montseny massif. Montsoriu lies within the limits of the Montseny Natural Park, one of the most emblematic nature reserves of our country, and from this vantage point a magnificent view of the massif can be enjoyed, with the Turó de l’Home and the Agudes peak as a backdrop. The vegetation that populates this sector is of the Mediterranean type with a predominance of holm and cork oaks, along with pine and chestnut in the shadier hollows. The presence of a botanical relic, a plant from the tertiary period (Galium scabrum), in the immediate surroundings of the castle should be noted.

The Montsoriu hill – or Montsoliu for the inhabitants of Arbúcies and the Guilleries –is bordered on the north by the Geneta torrent and the Arbúcies stream, to the east by this same stream, and by the Repiaix to the south. The hill descends smoothly from the Talavera pass, where the old path to the castle ran, to the Orri pass, a crossroads for several paths and where you can connect with the Gaserans highlands, the last ridge before you arrive at the plain of La Selva and the natural pathway opened up by the Tordera in the area of the Corredor.

The location of Montsoriu at the head of the Breda valley and at the foot of the Arbúcies stream, at the point where the plain opens up, allows it to enjoy visual control of a wide area, covering the pre-coastal depression and the coast on one side, and the Montseny and Guilleries massifs on the other side.

The castle has several halls with permanent and temporary exhibitions about the history of Montsoriu. At the reception you will find visitor services, ticket sales, a shop with merchandise and branded items, coffee, refreshment and snack machines, as well as toilets.

For access to the castle and the visit you will need clothing and shoes that are adequate for the time of year. A major part of the visit itinerary is outdoors.

The entrance ticket to Montsoriu Castle entitles you to free entrance at the Museu Etnològic del Montseny – La Gabella in Arbúcies. The museum includes a hall specifically dedicated to the Castle with samples of the archaeological finds and the Montsoriu tableware.

Check the general rules and regulations for visiting the castle.
Here you will also find the terms and public fees for hiring spaces in the enclosure.

To guarantee a place in the guided tour we recommend that you book in advance. Here you will find the dates and times available.